Finishing up with… Umineko! Oh, rly. Well, works for me.

And so twelve days has come and gone, marking our first actual success of the event. (I know, I’m shocked!) Unfortunately, we didn’t finish off with the Slayers doujinshi that I’d hoped we could do due to time restraints, but Melly and I agreed to do it anyway, since, Hi, can’t have Turtle Paradise without at least one Slayers doujinshi. =3 So at least you have that to look forward to tomorrow! And also, since Magic Gunner is a series of doujinshi, we’ll still release it at random intervals, just because it’s awesome and I don’t want to give it up, lawl. 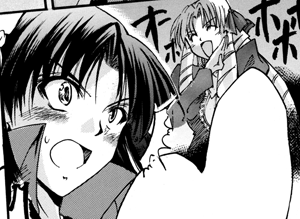 I said the double-releases wouldn’t last, but no one believed me! THEY NEVER BELIEVE ME.

Bah. At any rate, more Magic Gunner for your reading pleasure, and believe me when I say this series works just as well as a stand-alone manga. Sure it’s a little unpolished, but hey, that’s what you get with doujinshi.

We’re scanlators, kid. We do this shit pro bono.

With The Twelve Days of Doujinshi rapidly drawing to a close and us with a shit-ton more stuff we want to release, we decided to make today a double feature. On this fine occasion, you’re getting not one, but TWO western-themed doujinshi. Granted, one has absolutely nothing to do with the other, but hey. At least there actually IS a theme.

Now, I can’t guarantee that every day from here on out will be a double feature… But it’d be pretty freakin’ sweet if we could pull it off, huh? =D

And that’s not even scratching the surface.

This doujinshi. Is. INSANE. It represents over EIGHT VIDEO GAME SERIES, all of them mainstream enough to pique anyone’s interest. (Except maybe one or two.) Bottom line is, if you were into the JRPG golden period of the mid-to-late 90’s, you’re gonna like this baby. We’ve got Final Fantasy 7 AND 8, Xenogears, Wild ARMs 1 and 2, Gensou Suikoden, Persona, and Ore no Shikabane wo Koete Yuke. (The latter of which never got a domestic English release, but the premise is AWESOME. You play as a family that has a ridiculously short life-span, but to make up for it, you get to procreate with THE GODS to make the strongest baby EVER that’ll hopefully one day defeat the Shuten Douji, a demon-asshole who likes to go around being an asshole. Go watch some videos and educate yourself.)

That said, this is hardcore gag. But omg, is it funny. (And don’t you dare be afraid to download this even if you only know one of the series!)

Shootin’ up gangsters since 2004

Melly hasn’t stopped fangasming about this since the original Japanese volume came in the mail about a year ago, and for good reason. Magic Gunner is AWESOME. Loosely based on Type-Moon’s Fate/Stay Night franchise (with later appearances by other franchises, such as Tsukihime), this re-imagines the characters in a setting reminiscent of a modern wild west. As such, I’ve also reversed the names to Western order and adopted westernized suffixes in place of the traditional Japanese -san, -sama, etc formation, which seems to hold true to the author’s intent, considering he uses “Mr.” in place of “-san” at least once in the story. Feel free to lynch me for it later, but for now, read it and enjoy. There’s a lot more where this came from. >=3

Unfortunately, we weren’t able to locate any volumes other than this compilation (covering up through volume 4) and volume 5 (which is MIND BLOWINGLY AMAZING, btw), so if anyone has a source for volume 6 (released at c78, I believe), please let us know. Otherwise, the next release of the Magic Gunner series will probably be when the next compilation surfaces. (Hopefully by Winter of next year.)