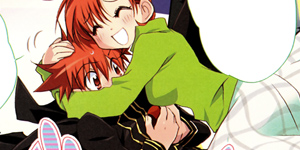 First things first! I bring to you the only new chapter of DNAngel we’ve had in three months – that’s right, folks, THREE FRIGGIN’ MONTHS, and it’s a BONUS chapter.

But it’s awesome. BEYOND ALL BELIEF. Keeping that in mind, no, there was no new chapter of DNAngel this month… AGAIN! Last month there was, though, so I’m late. WOOPS. XD

And while our servers were down, we also released chapter 10 of Slayers: Knight of Aqua Lord, so get that if you haven’t already.

And that’s it! Sad, right? I know. xD We’re catching up with our releases, though! WOOHOOO. (And this new host seems a lot faster than our old one. @_@ What do you guys think?)

11 Responses to “D•N•Angel Special chapter! (and others)”