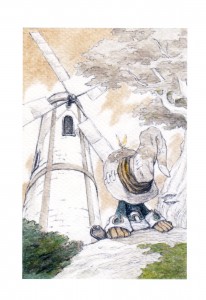 Here it is, everyone, the final (story-based) chapter/book in The F, and it’s… Boy, is it a way to close out a great book. Hope you all enjoy. This one was edited by Tom the Mighty (per usual), scanned by Melfra (per usual), and typeset and translated by yours truly (also per usual. As far as doujinshi are concerned, anyway.)

And thus, we bring the 12 days of doujinshi to a close and with it we celebrate Turtle Paradise’s fifth anniversary! It’s been a slow few years, hasn’t it? But hey, with an active period like that, at least you know we’re not going anywhere anytime soon. It’s come to the point where Melfra and I associate our birthday with this place anyway (being formed during one particularly heinous birthday bash), so if there ever comes a year where we don’t celebrate it with a mind-boggling amount of doujinshi, well, I don’t think I’ll ever be able to fill that void.

Speaking of which, our regular releases resume this week! We’ll be closing the book (lol) on one of our favorites, but I think it’s high time we started expanding our project repertoire. Starting this year, doujinshi will no longer be restricted to a Twelve-Days only event, and we’ll continue releasing them whenever the heck we feel like it. There were quite a few doujinshi this year that just didn’t pan out due to time constraints (Mostly because The F was so damn good we couldn’t help giving over 5 days to it in favor of some other, slightly less-deserving of its ilk. Please see: about four freakin’ Slayers doujinshi, including yet ANOTHER Teinyu, halp), and we’d have to do 12 days for approximately the rest of our lives to barrel through our collection at the rate we’re going.

Between starting a new, soul-sucking job with a schedule that took WAY more getting used-to than I’d ever expected, plus a few serious financial crises, hospital stays, and a car wreck, I’d say 2013 was a shitty year for TP, release-wise. Here’s hoping 2014 will be nice and uneventful. Now go read some fuck-awesome doujinshi.