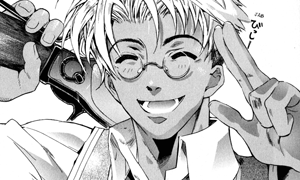 His smile hides a MURDEROUS INTENT.

I can’t count how many ways of awesome this week is. OH WAIT, YES I CAN. IT’S THREE. THREE WAYS OF AWESOME. That’s right. So awesome I had to use capslock.

But first, I’m gonna take a minute to soapbox and get a little sappy in the hizzouse, ’cause I never ever ever get to do that, and by god, you can afford me the luxury. Here’s a huge round of applause to the glorious staff of TP, specifically Tom the Mighty, Rainstride, Moonshayde, Shinigami and newbie editor Babycat, plus typesetters ZippyZippy and Ellzee, and Clover at QC helm, PLUS Melfra for being so ACE about scanning in millions and millions of doujinshi and editing some and QCing a shit-ton. Thanks for hauling ass on Twelve Days to make it our first-ever success, guys. If I could give out Christmas bonuses, I totally would, ’cause you all deserve it.

MOVING ON, LEST WE FORGET IT’S RELEASE DAY, we have prepared a fine course of two shounen titles, plus a shoujo that wishes it were a shounen. How’s that for a catch?

Download Barajou no Kiss chapter 22 AKA Mutsuki lusts over Anis HARD and makes up for his lack of screentime lately by being a big, fat, murderous slut. Also, that wraps up volume 5. Oh boy! IT’S TIME FOR TENJOH TO GET FABULOUS. Edited by Shinigami, and QC’d by Melfra. (ILU bb.)

Download Lost Universe chapter 2, AKA AAAHAHAHAA You ALMOST got trolled, but in the meantime sneaky people do sneaky things. Thanks to Tom for his sexy editing skillz, plus ZippyZippy for her fancy typesetting footwork, and Melfra who’s pretty much ace at making my scripts not suck on the QC front.

Download Flower Thieves ch. 7 AKA oh god that’s the end of volume 1, why does it have to end so soon, why, why, whyyyyy. OOH, EXPLOSIONS. Hi, Maxi. You’re ridiculously adorkable. At least, that’s what Melly thinks. Edited by Shinigami (Again!), typeset by Zippyzippy (AGAIN!), and QC’d by Melfra (AGAAAAAIN!) I’m detecting a pattern here…

Join us next week for EVEN MORE VULGARITY. Also, we have more doujinshi coming soon. STAY TUNED FOR SLAYERS, DAMMIT, IT WILL HAPPEN EVEN IF IT KILLS ME.