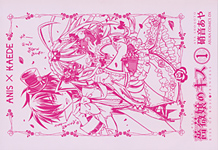 Wow, people were actually beginning to complain about how long that last poll was up there. Ehh, I’ll think of one that’s actually entertaining later, but for now it’s srs business! Poor Barajou. Poor Anise. The series has been through so many different revisions, it’s just getting old- even Anise has had her name changed not once, but twice! Unfortunately, the girl’s up for lucky #3, and here’s the deal.

Our decision to change Anise’s name from the official Anis to Anise was an issue in pronunciation. Reb was worried that our mostly western audience would pronounce “Anis” with a hard “A”, making the name almost indistinguishable from “Anus” which is.. Yeah, not something you want to deal with in a shoujo, that’s for sure. So we eventually decided to place the stress on the “I” to avoid this.

Now with the surfacing of the drama CDs (psst, you can find them at the forum!) it’s become common knowledge that Anise’s name really is pronounced “Anis,” so we don’t have that same problem any more.

Now it’s up to you guys! Do we keep “Anise” or do we switch over to “Anis?” We will release updated chapters if the latter is picked, but for now vote in the poll! Yeah! DO IT! Voting ends the 21st of December. That is, when the next chapter comes out xD