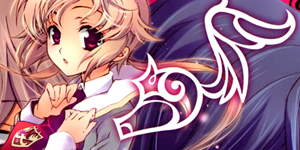 A competition between Hiyoki and Anise over who’s the cuter Shouoto heroine would mostly likely result in the universe imploding upon itself.

Good and gentle TP fanboys and girls, we have a new release for you from Aya Shouoto, the same GENIUS who brought us Barajou no Kiss! Well, there’s not too much to say about it for the moment… Just that it took us quite a lot longer to release it than we originally anticipated because of its visual complexity and SOLID WALLS OF TEXT. In any case, enjoy!

We haven’t decided on a release rate for this yet, but we’ve got about three volumes worth of material to pull from – on the downside, it’s published in a bimonthly magazine. So yeah, possible delays, but I doubt it. Also, be sure to read the translation notes included at the end of the chapter or else you probably won’t fully understand Hiyoki’s predicament, especially in regards to the “Qliphah.”