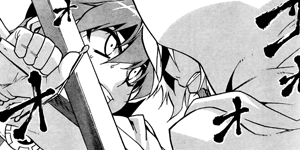 A promise of EPIC things to come

The Twelve Days of Doujinshi thing was a flop.
We haven’t released anything in over a month.
So why are you guys still hanging around here!?

Well, I’m in no mood to burst any bubbles, so here, have a fairly massive release. YEAH, YOU HEARD ME, WE’RE RELEASING STUFF. A LOT OF STUFF. Okay, so it’s not a lot… but it’s a start.

Download at will! And for those of you interested, Slayers Revolution features some minor changes to the anime story, mostly based around character designs and a new scene, again, not in the anime. In Evolution-R, Hyouju-sensei changed his art style somewhat, so Lina’s a lot less…. well, fugly. xD (I know that was holding some people back from reading it, but IT’S SERIOUSLY SO AWESOME.)

15 Responses to “Making up for lost time”